A new investigative report from Greenpeace, ‘How Sinar Mas is Pulping the Planet’, shows how major brands like Walmart, Auchan and Kentucky Fried Chicken (KFC) are fueling climate change and pushing Sumatran tigers and orang-utans towards the brink of extinction. 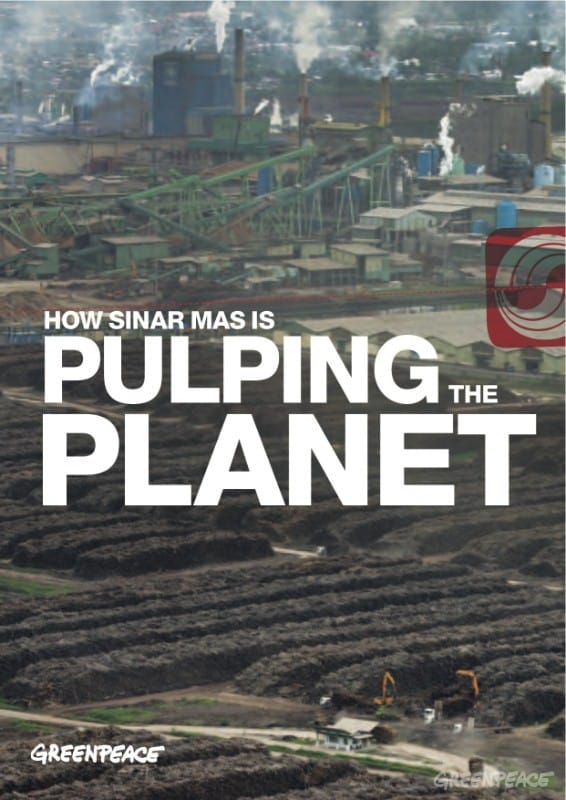 These companies are using or selling paper made from Asia Pulp and Paper (APP), part of the notorious Sinar Mas group that is destroying Indonesia’s rainforests and carbon-rich peatlands.

Greenpeace investigated two important rainforest areas on the Indonesian island of Sumatra and discovered that Sinar Mas is wreaking environmental havoc in both. The Bukit Tigapuluh Forest Landscape is one of the last refuges for endangered Sumatran tigers and orang-utans. Kerumutan’s carbon rich peatlands are a key defence against climate change; some of the forest’s peat is deeper than three meters and thus illegal to clear under Indonesian law. Sinar Mas’ paper arm APP uses the logs from these rainforest areas to feed its Sumatran based pulp mills, which export pulp and paper products worldwide.

These are just two of many important rainforests being decimated by Sinar Mas for pulp and paper and palm oil expansion. Indonesian President Yudyohono’s new commitments to reduce greenhouse gas emissions from deforestation will be undermined unless he extends the moratorium on new deforestation licenses to cover all forest and peatlands that are currently slated for destruction by Sinar Mas and other companies.

Several leading companies have already responded to Greenpeace evidence of the Sinar Mas group’s illegal and destructive environmental practices in Indonesia and are cancelling their contracts with the Indonesian palm oil and paper giant. Greenpeace is calling on the rest to follow suit.